HOME » From a Patient's Point of View

From a Patient's Point of View

Prior to the discovery of insulin severe diabetics were treated primarily by means of a strict diet which inevitably led to starvation if not out and out death from the disease. Children in particular suffered terribly from these severely restricted diets. For example, Leonard Thompson weighed only 65 pounds at the age of 14 when he was admitted to the Toronto General Hospital in December 1921, and was receiving only 450 calories per day. Jim Havens weighed less than 74 pounds at the age of 22, and when Elizabeth Hughes arrived in Toronto she weighed only 45 pounds and could barely walk on her own. After five weeks of treatment her weight had increased by ten pounds, and she was revelling in a 2500 calorie diet which included a pint of cream daily, having endured calorie intakes as low as 300 calories per day during the worst periods of her illness. In private correspondence, accounts in the popular press, and even in scientific journals the miraculous return to life and health of these patients once they received insulin was likened to a miracle. 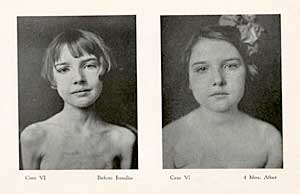 Photo of a typical juvenile diabetic before and after treatment

Once press coverage of the clinical trials began early in 1922 the Toronto group was besieged with requests for insulin. The severe problems with insulin production in Toronto at that time meant that only a very few critically ill patients could be considered for treatment. During the spring and summer of 1922 some of these severely ill diabetics, particularly the children, came to Toronto as Banting's private patients in order to be included in the clinical trials of insulin. The Toronto General Hospital diabetic clinic, under the direction of Dr. Duncan Graham, opened on 21 August and clinics were set up in several other Canadian cities soon afterwards. In the United States respected clinicians such as Dr. Elliott P. Joslin in Boston, Dr. Frederick M. Allen in Morristown, NJ and Dr. Rollin T. Woodyat in Chicago also began successfully to treat patients with insulin manufactured by the Eli Lilly Company. By early 1923 more than 1000 diabetics were being treated by more than 250 physicians in sixty clinics in the United States and Canada.

A selection of documents including letters, patient charts, newspaper clippings, and photographs are viewable here.

The following section gives an overview of some of the earliest patients to be treated during 1922.