In the fall of 1918, Professor J.J.R. Macleod, a respected physiologist whose chief research interests lay in carbohydrate metabolism, arrived in Toronto to take up the Chair of Physiology at the University. When he arrived at the University of Toronto Macleod had already published six monographs and numerous articles, was on the editorial board of Physiological Abstracts, the Journal of Biological Chemistry, and the Journal of Laboratory and Clinical Medicine, and was a member of several prominent professional organizations. During his first two years at the University of Toronto, Macleod received job offers from leading medical institutions in the United States and Great Britain, his book Physiology and Biochemistry in Modern Medicine went into its third edition, and he was being considered for election to the Royal Academy of Medicine. 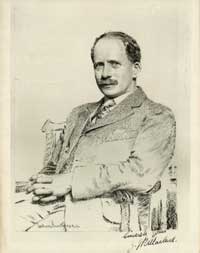 By November 1920, when F.G. Banting walked into his office, Professor J.J.R. Macleod, at 42 years of age, was an established physiologist with over eighteen years of research experience, an authority on carbohydrate metabolism, and at the height of his career.

Born in Cluny, near Dunkeld, Scotland, 6 September 1876, John James Rickard Macleod was the first child of Reverend Robert Macleod and Jane (McWalter) Macleod. He was a superior student and excelled in his classes at both Aberdeen Grammar School and Aberdeen University where he won first prize in all his first year subjects and graduated with Honourable Distinction earning an M.B. and Ch. B. in 1898. In 1899 Macleod was awarded an Anderson Traveling Scholarship which he used to study physiological chemistry at the Physiological Institute in Leipzig. It was in Leipzig that Macleod published his first scientific paper "Zur Kenntniss des Phosphors im Muskel" in Hoppe-Seyler's Zeitschrift f&‌#252;r physiologische Chemie, a German journal for studies in physiological chemistry. Macleod left Germany in 1900 having accepted a position as Demonstrator in Physiology at the London Hospital Medical School where Leonard Hill was head of the Physiology Department.

At the London Hospital Medical School, Macleod, in collaboration with Hill, began a study of caisson sickness. Their experiments resulted in a series of articles published in 1903: "The influence of compressed air and oxygen on the gases of the blood" in the Journal of Physiology, "Caisson illness and diver's palsy: An experimental study," in the Journal of Hygiene and "The influence of compressed air on the respiratory exchange," in the Journal of Physiology. During this time Macleod also earned a Diploma of Public Health from Cambridge University (1902). These publications and Macleod's reputation as a lucid and concise lecturer caught the attention of the officials at Western Reserve University in Cleveland, Ohio and in the spring of 1903 they offered Macleod the position of Chair of the Physiology Department. In August of that year, Macleod, now 27 years of age and newly married to Mary McWalter, set sail for North America.

At Western Reserve University, Macleod developed an interest in carbohydrate metabolism that was to last for the rest of his career. [1] Between 1907 and 1917 he published a series of articles entitled "Studies in Experimental Glycosuria I - XII" in the Journal of Physiology. In 1910, he delivered a lecture on various forms of experimental diabetes and their significance for diabetes mellitus at the joint meeting of the section on Pharmacology and Therapeutics and the section on Pathology and Physiology of the American Medical Association. [2] And in 1913 he published a monograph on diabetes entitled Diabetes: its Physiological Pathology. By the time Macleod left Western Reserve University to take up the Chair of Physiology at the University of Toronto in 1918, these publications had established him as an authority on carbohydrate metabolism.

When first approached, in 1916, by then President of the University of Toronto, Sir Robert Falconer, to fill the opening created by the departure of A.B. MacCallum, Macleod was unable to accept. But so good was his reputation and so desirous was the university to have men of his caliber on staff that the position was held open a year in the hope that the professor could take up the post in the fall of 1918. This, of course, is what he did. [3]

At the University of Toronto Macleod maintained his interest in carbohydrate metabolism. Annual reports for the Department of Physiology in 1920-1921 show that under his direction, members of his department were engaged in studying the behaviour of sugar in the blood of turtles. [4] In addition, Macleod himself contributed a paper on "Methods of study of early diabetes" to a symposium on diabetes at the May 1921 meeting of the Ontario Medical Association. Given this reputation, it is no surprise that Professor F.R. Miller from the Department of Physiology at Western University Medical School in London, Ontario counseled Fred Banting to approach Professor J.J.R. Macleod with his idea for isolating the internal secretion of the pancreas.

Macleod, although not impressed by the initial presentation of his idea for experimentation, arranged for Banting to come to the University of Toronto in the spring of 1921. [5] When Banting arrived, Macleod provided him with laboratory space, dogs, and two of his best students, C.H. Best and E. Clark Noble, as lab assistants to help him in his experiments. Macleod then instructed Banting in the Hédon method of performing a successful two-stage pancreatectomy on a dog. [6], reviewed the plan for the summer's experimentation and tests, and then, in mid-June, left for Scotland.

Upon his return to Toronto in September, Macleod, although encouraged that Banting and Best had achieved some measure of success, was cautious. He asked that the experiments be repeated and kept abreast of Banting and Best's findings. At Macleod's suggestion the name of the extract became 'insulin' and Banting and Best presented their findings to the Journal Club of the Physiological Society of the University of Toronto in November. [7] Then in December 1921, Macleod agreed to Banting's suggestion that J.B. Collip, a biochemist from the University of Alberta, should join the effort and the experiments gained momentum. Just before the New Year, Banting, Best, Collip, and Macleod traveled to New Haven to present their findings at the annual meeting of the American Physiological Society. [8] The presentation, delivered by Banting, his first to a large audience of scientists, was met with some skepticism. Macleod, as Chair of the session and the only one on the panel who was a member of the American Physiological Society, fielded the questions.

In January 1922, the first clinical trials of insulin began at the Toronto General Hospital. News of these trials and rumours of a new diabetic 'cure' was reported in the popular press and soon Macleod, as head of the Physiology Department, was busy answering requests for insulin from the public. [9] Meanwhile, Macleod began to assemble the team that would conduct research on the manufacture and physiology of insulin. By the end of January the Toronto insulin group had expanded to include E. Clark Noble, Dr. J. Hepburn, J.K. Latchford, and the Connaught Anti-toxin Laboratories under the direction of J.G. FitzGerald and R.D. Defries. [10]

In March of that year, Macleod was approached by Dr. G.H.A. Clowes, the Director of Research at Eli Lilly & Company, a large pharmaceutical manufacturer in Indianapolis, Indiana. Dr. Clowes proposed that his company help the Toronto group develop a method of large-scale production of insulin. At first Macleod rejected the offer but as the spring wore on and the Toronto group was unable to progress in a technique for large-scale production of insulin, Macleod contacted Clowes. [11] On 30 May 1922, the University of Toronto entered into an agreement with Eli Lilly & Company. [12]

In the summer of 1922 the availability of the insulin produced by Eli Lilly & Company allowed clinical trials of insulin to begin on a larger scale. At this time Macleod's research efforts were focused on an attempt to find alternative sources of insulin. To that end he spent the summer of 1922 at the Marine Biological Station in St. Andrew's New Brunswick experimenting on the possibility of obtaining insulin from fish. Meanwhile, he continued to direct and supervise research on the action of insulin in the Toronto Laboratories and in September 1922 Macleod was asked by Ernest H. Starling to write a monograph on diabetes and insulin [13]. This book entitled Carbohydrate Metabolism and Insulin was published in 1926.

In addition to his scientific research, Macleod's administrative responsibilities increased as news of insulin spread. From August 1922 to May 1923, Macleod was the official secretary of the Insulin Committee, the administrative body set up by the Board of Governors of the University of Toronto to deal with issues of patenting and licensing insulin. During the first crucial year in the development of insulin, Macleod was responsible for coordinating the patenting of insulin in Great Britain and the United States, and was the main correspondent with Dr. G.H.A. Clowes at the Eli Lilly & Company.

Recognition of Macleod's achievement in the field of physiology and his efforts in the discovery and development of insulin came in 1923 [14]. First, early in the year, Macleod was awarded the Cameron Prize by the University of Edinburgh, in May he was elected a Fellow of the Royal Society, and in October the Karolinska Institute in Stockholm announced the winners of the 1923 Nobel Prize in Medicine. The prize, for the discovery of insulin, was awarded to Banting and Macleod at the University of Toronto. This announcement was followed by Banting's statement that he would share his half with C.H. Best and Macleod's notice that his half would be shared with J.B. Collip. [15]

Macleod spent his next five years at the University of Toronto experimenting on insulin and campaigning for the establishment of an international standard for the potency of insulin. Serving on the League of Nations Health Committee, Macleod participated in the talks that led to the establishment of an international biological standard for insulin in 1926. [16] Macleod also managed to write a third monograph on diabetes, The Fuel of Life: Experimental Studies in Normal and Diabetic Animalswhich was published in 1928. In 1927, an offer came from his Alma Mater the University of Aberdeen to fill the position of Regius Professor of Physiology. Macleod and his wife decided to return to Scotland and in the summer of 1928 sailed back across the Atlantic [17].

At Aberdeen, Macleod remained an active researcher and experimenter. He gave numerous lectures and published several papers and continued to be active in the field. In the 1930s Macleod's health steadily declined. A victim of severe arthritis, Macleod's movements became more and more limited as the disease became progressively more debilitating. His mind remained active and he kept up many of his editorial duties; less than two months before he died, Macleod wrote C.H. Best in Toronto to inform Best that he had put Best's name up for election in the Royal Society. [18] In early 1935 Macleod entered a nursing home in which he spent two months before returning to his home. Professor J.J.R. Macleod died on 16 March 1935; his wife Mary died five years later.

Books and articles about Macleod:

Williams, Michael J. "J. J. R. Macleod: The Co-discoverer of Insulin" in Proceedings of the Royal College of Physicians of Edinburgh. vol. 23, no. 3, Supplement No.1 (July 1993)