When James Bertram Collip arrived in Toronto to work with Prof. J.J.R. Macleod in the spring of 1921, he was already a research scientist of some experience. Collip had trained in biochemistry research under Prof. A.B. Macallum at the University of Toronto and had been conducting original research work at the University of Alberta for almost five years. 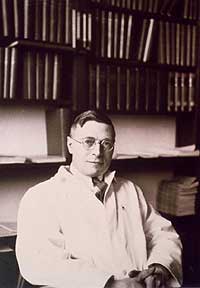 His first scientific paper, written with Prof. Macallum, was published in 1913 when Collip was just 21 years old. In December 1921, when he joined F.G. Banting and C.H. Best in their pursuit to purify insulin, J.B. Collip, at 27 years of age, was Associate Professor of Biochemistry at the University of Alberta and had twenty-four publications to his name.

Born in Belleville Ontario 20 November 1892, James Bertram Collip was the first child of James Dennis Collip and Mahala Frances (Vance) Collip. [1] His education began in a one-room schoolhouse in Belleville and was continued at Belleville High School until 1908 when he entered Trinity College in Toronto at the age of 15. Too young for medical school, Collip enrolled in the Honours Biochemistry and Physiology programme and graduated at the top of his class in 1912. It was during his years at Trinity that Collip met Ray Vivian Ralph, a student at Trinity College's sister school, St. Hilda's and the woman who would later become his wife. After earning his B.A., Collip went on to complete an M.A. in 1913. Then, as one of only three graduate students supervised by Prof. A.B. Macallum at the University of Toronto, Collip received a Ph.D. in Biochemistry in 1916.

Initially, Collip intended to use the Rockefeller Fellowship to study the chemistry of respiration and the chemistry and physiology of the glands of internal secretion at three separate institutions. In addition to the University of Toronto, Collip had plans to study with H.H. Dale at the National Institute for Medical Research, London, and with Donald D. van Slyke at the Rockefeller Institute in New York. But the events in Toronto during the summer of 1921 changed his plans. Sometime in early December 1921 Collip joined in the effort to purify the pancreatic extract so that it could be administered to humans. In early January 1922, Collip wrote enthusiastically to the President of the University of Alberta detailing the success of the insulin experiments [3] and by late January, he had traded his Rockefeller Fellowship for an Assistant Professorship of Pathological Chemistry at the University of Toronto [4]. The new position enabled him to remain in Toronto longer and continue work on insulin.

As a member of the team at the University of Toronto, Collip made several valuable contributions to the development of insulin. First, in mid-December 1921, he demonstrated that insulin, in addition to reducing the blood sugar levels of depancreatized dogs, also rendered their urine ketone free and processed glucose to glycogen in the liver. Second, Collip observed and cured "insulin shock," and third, Collip was the first to produce a form of pancreatic extract pure enough to be injected into a human patient [5]. It was his extract that was injected the second, successful, time into Leonard Thompson on 23 January 1922. Unfortunately, Collip neglected to record his formula and sometime in February or early March 1922 he lost the ability to produce a purified insulin extract. The disastrous results were twofold: first, diabetic patients, who had been treated with insulin for almost two months, now had to do without the life-saving extract and, second, rather than spending the spring solving the problem of large-scale insulin production, the efforts of the entire Toronto research team were engaged in rediscovering a method of purification. Although the purification of insulin was again achieved, the Toronto group ran out of time and failed to resolve the problems of large-scale insulin manufacture. In May 1922 J.J.R. Macleod began negotiations with G.H.A. Clowes of Eli Lilly and Company.

At the end May 1922, his research year over, Collip left the University of Toronto and returned to the University of Alberta now as the Chair of the Department of Biochemistry. In Edmonton, Collip turned his attention to alternative sources of insulin continuing his research with the help of Prof. Macleod and a Carnegie grant [6]. Collip first looked to clams as a source of insulin [7], then to yeast, and then, finally, to plant tissue. Believing his early experiments with plant tissue were of tremendous importance, Collip reported his findings at a meeting of the Society for Experimental Biology and Medicine in March 1923, introducing his new plant hormone "glucokinin." He then went on to publish a series of articles on the effects of glucokinin but when further research failed to produce any encouraging results Collip abandoned the pursuit. By late October 1923, when news of the Nobel Prize was announced and J.J.R. Macleod made known that he would share his prize with Collip [8], the young professor's attention had already turned towards endocrinology, the field of research he would continue to develop for most of his life.

Collip remained at the University of Alberta for another five years of productive scientific work. Between 1922 and 1927, Collip published over forty articles, was awarded the degree of D.Sc. (1924) [9] and an M.D. (1926) both from the University of Alberta, and still found time for research. In 1925 he successfully isolated the active principle of the parathyroid glands, parathormone, a hormone that increases the amount of calcium in the blood. Unfortunately this discovery, like the discovery of insulin, was the subject of controversy over priority. Nonetheless, Collip's accomplishments did not go unnoticed and in 1927 he was approached with two offers. The first was from the Mayo Clinic in Minnesota and the second, the offer Collip accepted, came from McGill University in Montreal where he was invited to succeed A.B. Macallum as Head of the Department of Biochemistry [10].

Collip moved to Montreal in 1928 and it was at McGill that Collip's work in endocrinology began in earnest. The years between 1928 and the 1939 are generally thought to be the most important period of Collip's scientific career; he was a productive researcher and writer and is often credited with helping to build the practice of medical research in Canada. During this time he developed at McGill one of the best research centres in Canada which included among its staff Hans Selye, originator of the 'stress' theory, who joined Collip's laboratory as a research assistant in 1930. This research centre described many placental and pituitary hormones including oestriol, 'Premarin,' 'Pituitrin,' and 'Emmenin.' [11] The most famous discovery to come out of Collip's McGill laboratory was the isolation of the adrenocorticotrophic hormone (ACTH), a hormone produced by the pituitary gland which influences the action of the adrenal cortex.

In 1938 he was invited to join the Associate Committee on Medical Research of the National Research Council, a committee chaired by F.G. Banting. In 1939 Collip was appointed Vice-Chairman of the committee and, in 1941, after Banting's sudden death, Collip became Chairman. The news of Banting's death came as a terrible shock to Collip for in the years since the discovery of insulin the two men had formed a friendship. Banting had stopped in Montreal on his way to Newfoundland and Collip was one of the last people to have seen Banting alive. After Banting's death, Collip's duties at the National Research Council increased; in addition to his responsibilities with the Committee on Medical Research, Collip was a member of the Associate Committees on Naval Medical Research, Army Medical Research, and Aviation Medical Research and he was appointed Medical Liaison Officer to Washington. In this last position Collip held the rank of acting Lieutenant-Colonel, Royal Canadian Army Medical Corps from 1942 to 1944 and was promoted to Acting Colonel in 1944. [12]

During the war years, Collip's duties required him to commute between Montreal, Ottawa, and Washington D.C. As a result, much of his energy was taken up in travel and administrative matters and little time was left for research projects. Although Collip did eventually return to research work at the end of the war, his days in the laboratory were almost over and in 1947, after almost twenty years at McGill, Collip left Montreal for London, Ontario. The University of Western Ontario had offered Collip the position of Dean of Medicine and Head of the Department of Medical Research. [13]

When Collip arrived in London, the University of Western Ontario was lacking the high standard of laboratory equipment, staff, and students that had been available at McGill. But the University's administration pledged its commitment to building a research program and erected a new building to house a modern research facility. That building was christened the Collip Medical Research Laboratory in 1947. [14] Collip's presence helped to attract students and faculty and he spent his years at the University of Western Ontario improving and expanding the medical research programme.

Collip died on 19 June 1965 after suffering a stroke. He and his wife had three children: Margaret, Barbara, and John Bertram (Jack).

Books and articles about Collip: