Born on 27 February 1899, Charles Herbert Best was the youngest of the co-discoverers of insulin. His parents Luella Fisher Best and Herbert Huestis Best, a doctor, were Canadian citizens from Nova Scotia living in West Pembroke, Maine, where C.H. Best spent his childhood and received his early education. After graduating from high school in 1915, Best moved to Toronto, briefly attending Harbord Collegiate and then commencing his B.A. at University College in the University of Toronto where he was president of his first year. 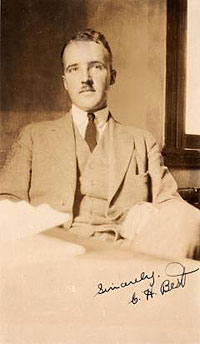 In 1918 he enlisted in the Canadian Army, serving at Petawawa, Ontario, with the 70th battery of the Horse Artillery, becoming a sergeant, and then, overseas in Wales with the 2nd Canadian Tank Battalion [1]. He returned to Toronto in 1919 to complete his undergraduate degree in the Physiology and Biochemistry course.

In July 1920 Best became engaged to Margaret Hooper Mahon at the farm of his friend and classmate, E. Clark Noble. The two friends worked as research assistants under the supervision of Professor J.J.R. Macleod [2]. In the spring of 1921, Best and Noble graduated from the Physiology and Biochemistry course. Both men were to start the M.A. program at the University of Toronto the following year. Macleod offered Best and Noble the opportunity to spend part of their summer working with Dr. Frederick Banting, assisting him with experiments on depancreatized Dogs. Best and Noble allegedly tossed a coin to determine who would start first. Best won and promptly began work with Banting. Noble was to have replaced Best in July, but sometime before then he and Best agreed that Best, who had become surgically proficient at the required operations, would stay on until the end of the summer. Discoveries made in the lab during the critical summer of 1921 determined the future course of C.H. Best's career.

The experiments began on 17 May. Their initial results were discouraging and were conducted in hot, cramped, and difficult conditions. The first sign of success occurred on 30 July, after an injection of pancreatic extract resulted in the lowering of blood sugar in Dog 410. [3] Subsequent injections into Dogs 406 and 408 had similar effects. [4 and 5] An elated Banting and Best conveyed the promising results in separate letters to Macleod [6] [7]. That fall Banting and Best drafted their first paper, "The internal secretion of the pancreas," and on 14 November presented their conclusions at a meeting of the Journal Club of the Physiological Society of the University of Toronto [8]. In December 1921, Best, along with Banting, Macleod, and J. B. Collip traveled to New Haven to present the results at the annual meeting of the American Physiological Society. Many prominent scientists and doctors, including two senior diabetes specialists, Dr. E.P. Joslin and Dr. F.M. Allen, and G.H.A. Clowes, director of research for Eli Lilly and Company, were in attendance and the Toronto team fielded many questions about their findings. [9]

Best then began to develop a method for producing a potent, pure extract that could be safely administered to humans. On 11 January 1922, Best's pancreatic extract was injected into Leonard Thompson, a fourteen-year old diabetic at Toronto General Hospital. The extract lowered blood sugar but had little clinical effect. On 23 January, however, a purified extract produced by Collip proved successful. [10] The production phase of the insulin project had begun, with the cooperation of the Connaught Anti-toxin Laboratories. [11]

In February 1922 Collip proved unable to sustain the purity and potency of the extract he had made in January. The resulting insulin famine pressured Best and the insulin team to refine their extraction methodology. In May a stable method was established and the team enlisted the Eli Lilly Pharmaceutical Company to collaborate in large-scale production and Best, at only 23 years of age and having just completed his M.A., was put in charge of the production of insulin for Canada. He was also serving as a liaison between the Research Laboratories of the Eli Lilly Company in Indianapolis and the Connaught Laboratories in Toronto. In the summer of 1922, large-scale clinical trials of insulin began at the Toronto General Hospital and the Christie Street Hospital.

Best entered Medical School at the University of Toronto in the fall of 1922, while still the director of the insulin Division of the Connaught Laboratories. That spring the Banting and Best Medical Research Act became law and the university established the Banting and Best Chair of Medical Research, with Banting as its first director. In July, C.H. Best was appointed a research associate with a budget of $2500 for the "promotion of Medical Research under his direction." [12] He was lecturing to a group of medical students at Harvard University on 26 October 1923 when he received word that Banting and Macleod were awarded the Nobel Prize. Dr. E.P. Joslin, who had invited Best to speak at Harvard, read aloud to Best and his audience the telegram that announced Banting's intention to share his half of the award with Best. [13]

On 3 September 1924, Best married Margaret Mahon [14]; in 1925 he graduated from medical school at the top of his class, thereby earning the Ellen Mickle Fellowship. Later that year the couple set sail for England, where they spent the next two and a half years while Best did postgraduate work under the supervision of H.H. Dale, Head of the National Institute for Medical Research, London. [15]. In 1928, Best was awarded a D.Sc. from the University of London and returned to Toronto, this time as Head of the Physiology Department, filling the position left vacant by the departure of Macleod. Macleod himself had recommended Best for the job [16].

At the University of Toronto Best continued to research the physiological action of insulin, and to direct teams researching the discovery of histaminase and choline. Best's most acclaimed scientific accomplishment after insulin was a project he began after becoming Head of the Physiology department. In 1929, Best assembled a team to research the purification of heparin in the 1930s. Heparin, a blood anticoagulant, had been discovered in 1916 at Johns Hopkins University but remained toxic until Best and his co-workers succeeded in developing a purified heparin extract safe for human use. By 1935 heparin was being tested in surgery at Toronto General Hospital and by 1940 was available on a large scale. None of the open heart surgery or organ transplants undertaken today would be possible without heparin.

In 1939 Best joined the war effort, initiating the Canadian Blood Serum Project, which produced dried human serum for military use. This project involved the collaboration of Best, his staff, the Connaught Anti-toxin Laboratories, the Canadian Red Cross, and the financial support of the Canadian government. Best's war work increased in the 1940s when, following Banting's death in 1941, Best assumed the position of Director of the Banting and Best Department of Medical Research. He channeled that department's resources towards research for the Royal Canadian Navy. In 1942, he was appointed director of the medical research unit of the Royal Canadian Navy with the rank of Surgeon, Lieutenant-Commander. In this capacity he began studies on night vision, motion sickness, nutrition and other conditions affecting naval personnel at sea. Best was promoted to Surgeon Captain in 1943 [17].

After the war, Best turned his attention back to diabetes. He led a research team seeking a method to stimulate the islets of Langerhans to produce insulin in diabetic patients, as well as organizing lay support groups and educational programs for diabetics. In 1940 Banting and Best were made honorary presidents of the newly formed American Diabetes Assocation. Best was also honorary president of the International Diabetes Federation and of the Canadian Diabetes Association.

In the 1950s, in recognition of Best's contribution to Canadian scientific research, the University of Toronto drew up plans to construct the Charles H. Best Institute. The building, erected beside the Banting Institute on College Street, opened in 1953. Throughout the 1950s Best's textbooks, co-written with Norman Burke Taylor, continued to be widely used and reprinted: The Human Body and its Functions, The Physiological Basis of Medical Practice, and The Living Body.

After a severe illness, Best retired from his university positions in 1965. In 1971-1972 he and his wife participated in worldwide events celebrating the fiftieth anniversary of the discovery of insulin, giving lectures and attending festivities in North and South America, Europe and the Middle East. He died at Tor8onto General Hospital in 1978, one week after hearing the news that his eldest son had succumbed to a heart attack. He was 79 years old.

Books and articles about Best: